Comprehensive set of books about the new North Atlantic

The trace of the past
The books examine North Atlantic cooperation can be framed anew.
Apart from the geographical similarities, the countries - Greenland, Iceland, the Faroe Islands and coastal Norway - also have in common the fact, that they have belonged to the Danish empire, where power was asymmetrical in varying degrees and had a different face, from country to country.
Today, former hierarchies are replaced, and efforts are made towards creating equal partnerships.
However, the books show that ideological and emotional traces of the past remain - both when it comes to relations with Denmark and among the countries in the North Atlantic. 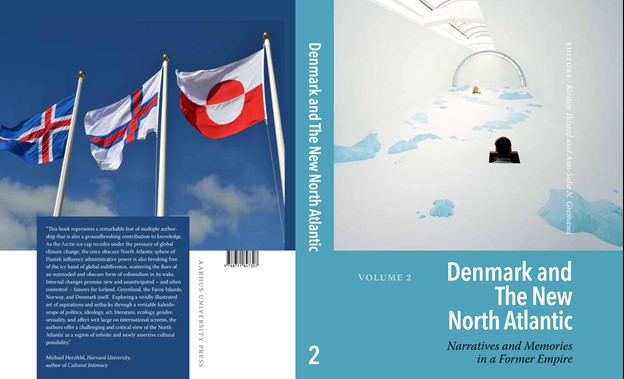 The set of books about the new North Atlantic are in two volumes. This is the cover of the second volume

Bergur’s contribution
Bergur Rønne Moberg is the chief author of the chapter “The Blue Atlantic. North Atlantic Imagined Geography”.
The referenced blue colour is mainly meant to underline that this is not a case of “the Black Atlantic”, which refers to considerably more brutal colonisations that were not seen in the Danish colonisation in our part of the North Atlantic.
Paul Gilroy described “The Black Atlantic” in one of his books, which describes a completely different world compared to the privileged North Atlantic.
Otherwise, the blue colour is primarily meant to symbolise the geographical countries and cultures in the North Atlantic which suffer from capacity shortage as a result of having been so remote and small.
In these classic symbolisms, the north is described as a lonely, grey and poor country, and thus brings to mind a kind of “blue” emotion.
This symbolism originally came from abroad, from European travelogues and topographies. As these cultures evolve into modern (art)creating nations and begin to reflect on their own identities, they are affected by the continental gaze from without. But at the same time, they find their own voice and combine the gaze from without and the gaze from within.
In this case, the blue colour mainly represents the ocean, which binds these geographies together, and which no longer symbolises remoteness and capacity shortages, but rather a purity, wealth and attractive landscapes in a time of mass pollution and treacherous climate change.
In general, the ocean and nature communicate a new self-awareness. This becomes apparent when these cultures take over and map what is theirs, after having been portrayed and mapped by others. The North Atlantic cultures turn the original continental and colonial mappings and objectifications of themselves as “remote” and, more or less, “unimportant” geographies, upside down.
This is why we talk about “The Importance of Being Unimportant (Epeli Hau’ofa)”, which reflects a dynamic combination of outside and inside gazes. A new self-esteem takes root in this double-gaze, which, notably, uses the geography, understood as ocean, ice, mountains, fields, lakes, promontories, volcanoes, hot springs and play of lights to create a self-awareness and an independent identity.
Being gloomy about being a “remote” northern part of the world is in this case only one of several geographical symbols within North Atlantic art and culture, which we explore in greater detail.
The region has become wealthy and continuously wealthier throughout the 20th century, which has affected the geographical self-image. Geography becomes symbolic and is used in new ways.
In this context, the chapter illustrates how artists and the tourist industry alike use geography and nature as place-branding and attention-capital. We have examined how everything from novels and works of art to book fairs and travel advertisements promotes the region through the use of unmitigated geographically symbolic images.
This chapter looks at examples from literature, book fairs, art, travel advertisements, financial crises, fisheries and harbours (Føroyingahavnin), as well as certain occurrences. The analyses are steered by both new and old concepts.
The examination of culture and art in these countries and regions are not only looked at as colonies but also through other geographical approaches such as islands, the northern part of the world, as ultra minor, i.e. non-metropolitan cultures, as the outskirts.
Overall, we see very diverse and in-depth descriptions of geographical symbolisms in the North Atlantic, which reach into and beyond postcolonial descriptions.

My contribution
I was the chief editor of chapter seven, called “Sovereignty, Constitutions and Natural Resources”, in which I wrote about the work on the Faroese constitution. I read the crime- and journal novel “Djevelen kan ikke lese” by Silvia Henriksdóttur as a harsh response to Faroese (national)politics. In this novel, the criminal act happens during the independence celebrations and is tangled up in the circumstances of a radical religious sect.
Furthermore, I wrote about Faroese fisheries in Greenland and the domestic colonisation that it constituted.
Land was taken and named, but the natives remained nameless because the goal was to reach the large quantities of fish that was of tremendous importance for the economic situation of individual fishermen and the Faroese nation as a whole.
I contributed to the chapter on narrative with purity and loyalty, and in the chapter on national sexual concerns, I told some of the newer stories about gender in the Faroe Islands.
In the novel “Barbara”, I focused on the capitalisation of emotions that circulate, and on Barbara’s character as “the Faroese nature” which cannot be moved abroad. Altogether, I contributed to four of the seven chapters and was the editor of one.

The grounds for the research project
We were especially curious to examine the connections between the North Atlantic countries and the diversity of each country individually.
We talk about a common history and common assumptions, while at the same time we acknowledge that the connections that future cooperation and fellowships should build on are, in reality, not very deep.
This is especially true for the Greenlanders and the Saamis and the rest of the North Atlantic. In the book, we want to reveal what is hidden behind the contradiction of, on the one hand, strong associations and, on the other hand, insufficient connections.

Our approach
The interdisciplinary group of researchers include historians, literary scholars, art- and cultural historians from the North Atlantic and Denmark.
The methodology is broad, spanning from the study of sources to fieldwork. The books do not tell the complete history of Iceland, Greenlandic literary history or the Faroese history of arts. These can be found elsewhere.
We have tried to pinpoint the connecting dots between the countries and where comparisons can be made. The ideas are formed collectively and in a joint writing effort - the text is jointly, not separately, written, in order to achieve interdisciplinary and cross-national insights.

A better understanding is needed
The subject is important because the North Atlantic countries are about to establish themselves as a new and powerful Arctic hub.
In these times, we see the formation of a growing number of partnerships in the cultural, industrial, research, educational and environmental fields. The rest of the world follows the development with great interest, and a lot of research on the individual countries exists, but research on the internal history and the different conditions, which characterise the countries and their relationship with Denmark, is scarce.
Detailed insight into these affairs is essential for the understanding of the current trajectory - as well as for the possibilities and impediments for future relations.

A more diverse conversation
Nowadays we witness a worldwide reckoning of racism and remnants from empires and colonial pasts. The relations between Denmark and the former dependencies are also dragged into this postcolonial reckoning.

We hope that the new knowledge can help to facilitate a more diverse conversation. Our goal has been to get a more in-depth understanding of the intense emotions that are tied up in history and it’s symbols and metaphors.
The set of books is based on the belief that only if we know our history, we can choose which parts of it we want to take along into the future, and which parts of history, we want to leave in the past.