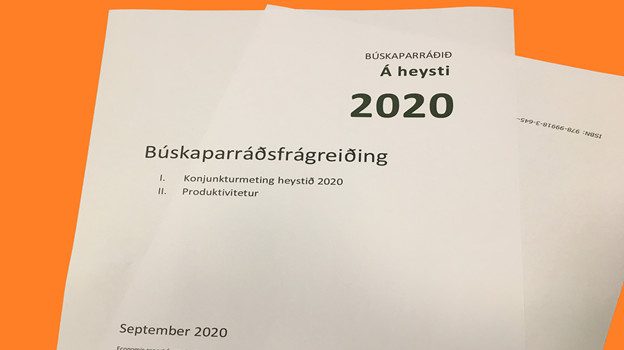 The Economic Council of the Faroe Islands says that the economy has had a negative shock from Covid-19, but the Faroese economy is not in a crisis. The economic report was released yesterday

The Faroe Islands Economic Council has revised its 2020 GDP growth forecast in light of the disruption caused by the Covid 19 epidemic. GDP growth in current prices is now estimated to drop to -6.9% in 2020 and bounce back to 5.5% in 2021.
The data for 2019 has also been recalculated on the basis of updated statistics
The year 2019 was a period of remarkable economic growth driven by factors such as increased aquaculture and pelagic catch exports. Exports grew by 19% in 2019 compared to 2018. Other sectors of the economy were also stimulated by the fast-paced growth.
The Covid-19 epidemic interrupted this upwards trend with a shock to the Faroese economy. The Faroese tourist industry has been particularly hard hit by the measures implemented in order to prevent the spread of Covid 19. A drop in fisheries exports is forecast for 2020, along with a decline in the price of farmed salmon, mackerel and all demersal species.
Global restaurant demand for Faroese salmon has tumbled, and, at present, both pelagic and demersal catches are largely consigned to warehouse storage due to limited market access.
However, growth in fisheries export is forecast to return in 2021, and the year 2020 is expected to constitute a temporary hiatus with a marked fall in GDP followed by swift readjustment.
The speed of readjustment is already evident from the resurgence in employment. The statistics trace a distinct V shape as a sharp drop in employment in April 2020 was followed by a steep rise up to July 2020. Private
consumption also appears relatively unaffected by the temporary lockdown. Households that did not travel abroad this summer spent part of their holiday savings in the Faroe Islands, and placed part of them in deposits with financial institutions.

2020 and 2021 national budgets in the red
The public treasury balance in DKK is forecast to total -583 million in 2020 and -570 million in 2021. Both years are heavily influenced by the Covid 19 epidemic driving a rise in expenditure and, in particular, a reduction in revenues. The year 2020 is, however, also marked by the Government’s lose fiscal policy
with higher expenditure and lower revenues (including hikes in state pensions and tax deductions).
The purpose of counter-cyclical economic policies is to smooth economic fluctuations caused by various factors. A condition for reaping the benefits of counter-cyclical measures is that demand from the public service sector act as a stabilising factor.
This means that spending on operations, income transfers and investments must remain stable, while revenues are allowed to trail the cyclical fluctuations of the economy. Hence, public administration and services should leave a surplus during economic upswings and may run a deficit during downturns.
In terms of the preconditions for implementing counter-cyclical policies, what matters is the Treasury’s financial position and creditworthiness, not the financial position of other sectors. Because if the government were forced to seek funding from other areas of the economy, the financial leeway of these
sectors would be curtailed and that would counteract the appropriate counter-cyclical policy measures.
ALS, The Faroese Employment Office, is in a unique position in this regard.
During the epidemic ALS has backed legislative amendments authorising ALS to pay wage supplements to furloughed workers. The fact that ALS has taken on this task demonstrates that the Government can expect to collaborate with ALS should similar situations arise in future.
With this exception, the view above is correct, the Faroese Government and Parliament must ensure that the Treasury’s finances are sufficiently robust to allow for the implementation of sensible counter-cyclical policies.
In the long run, however, it is imperative that the Treasury consolidate in order to meet the challenges of financial durability.